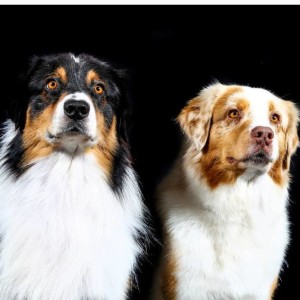 What is an Australian Shepherd?

The Australian shepherd, or the Aussie, is a medium size breed of herding dog, who was developed in Western America.  There are debates over where the breed originated from, with some speculation that they came to Australia via Spain on the ships with the merino sheep.  After this, they travelled to America as early as the 1800s, where the breed was developed, and after World War 1 their popularity began to rise.

Aussies are a fun, playful and energetic breed of dog, who seem to stay puppy like even as they grow old.  Although most aussies aren’t nuisance barkers, when playing, Aussies can be very vocal and love to let you know that they are there.  Aussies are a very loyal dog, who usually pick their one person.  They love nothing more to be out and about, and are very active.  Although they are a very outgoing, happy breed of dog, Aussies can be reserved around people they don’t know, and show guarding behaviours.  As they were developed to work on ranches, Aussies can be quite a protective breed of dog, especially around their property and owners.

Because of the high drive and energy of an Australian Shepherd, they excel at dog sports and competition such as agility, obedience and herding.  There are a very versatile stock dog, who work with a range of different animals, including cattle, sheep and poultry.  They aim to please their owners, learn very quickly, think for themselves and can be very food driven.  Aussies are a clown of a dog, who form devoted bonds with their people.

Australian shepherds are a medium size breed of dog with the following ranges of heights and weights:

One hallmark of our beautiful breed in their naturally bobbed tail.  Aussie can have varying length of tail, from short to long and all lengths in between.  The Aussie has a very typical ‘wiggle’ to them, and like to banana bend and wiggle their whole back ends when they’re happy.  Another characteristic that is seen in some lines is the ‘smile’.  This can be mistaken as begin aggressive, but it’s infact the opposite.  The smile when they’re happy and excited.  We’re lucky enough at Blueamble to have smiling in some of our lines!!

The Aussie has a moderate length coat, that is usually straight, but can sometimes be wavy.  They have a relatively easy to care for coat, with regular brushing to avoid any matting.  It’s a good idea to keep an eye on the ears and under the arms, as this is where matting can occur.

They come in four main colours: 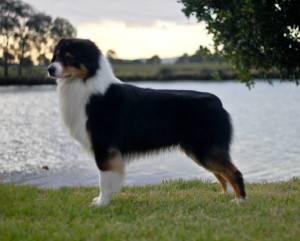 Blue Merle – Blue merle (a mottled blue/grey type of colour), white and with or without tan points. 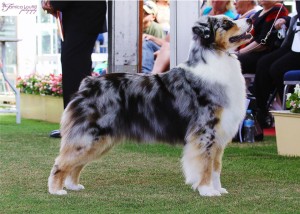 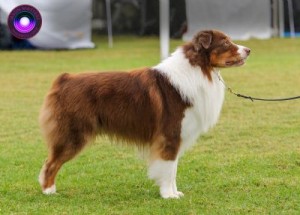 Red Merle – Red merle (a mottled colour of reds/cream/liver), white and with or without tan points. 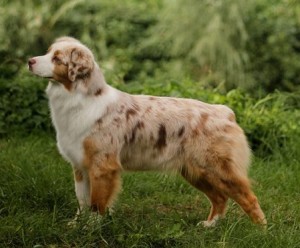 There can be many variations of the above colours, including Bi tris, and bi merles (no tan points).  They can also have varying amounts of white on the coat, from large white collars, white legs and white through the coat, to very minimal to no white.  All black and blue dogs have black noses and eye rims/pigment, while the red merle and red tris have liver noses and pigment.

Aussies have an average lifespan of between 12-14 years old, and are generally a very hearty breed.  Most responsible breeders will run different genetic testing on all breeding stock, and this should be researched when looking to add an Australian Shepherd to your family.  Tests include:

Australian shepherds are a fun, active and loyal breed of dog, but not for everyone.  They require someone who is willing to put in the effort, but will gain amazing rewards from these dogs.  If you think an Australian Shepherd would suit your life style and family, please send us an email telling us a little about yourself.